The dishwasher door is locked in the closed position with a special lock that can break. It is impossible to operate the machine with an inoperative locking device, therefore, all measures must be taken to produce a quick repair of the door latch. How can such a latch be repaired and, if necessary, changed? 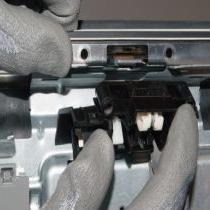 Not every dishwasher lock can be fixed. Modern locks on the latest models of dishwashers are designed in such a way that they cannot be restored in case of damage. Such a lock has to be changed.

Old locks had a plastic case with a latch and a sensor enclosed in it, as well as special locking tendrils. These elements of the lock were rather flimsy, their plastic base was especially weak, which simply broke off after the next door opening. If your dishwasher is equipped with such a lock, you will immediately see the broken antennae, which we will try to restore. What action does the situation require from us?

Unscrew the front panel of the dishwasher door. If a facade is installed instead of the front panel, we also remove it. The front panel is fastened with several screws that are located on the inside of the door along the edges

Removing the front panel, we get access to the power wires of the lock, they need to be removed.

Unscrew the two screws that hold the lock and remove it

Bend the plate so that it lies across the broken bases of the fasteners, which used to have antennae

Fully metal locks do not break so often, but if they fail, it is impossible to fix them at home, you need to change them. This is not about the banal sinking of the locking tongue, but about a full-fledged breakdown with the springs popping out and the partial destruction of the lock case. By the way, the principle of operation of the new locks is more similar to how the door lock devices work on a washing machine, but they change in a different way.

We act in the same way as in the case of repairing the lock. Unscrew the bolts around the door and remove the front panel

Disconnect the wires going to the lock sensor

At the top of the door there are two screws that hold the lock. Having unscrewed them, we can safely take out the failed device

We take out a new lock and insert it into the place of the old one. We fasten the new locking device, put the wires back in place and fasten the previously removed panel. The work is done! If you need help with dishwasher repair, call us right now!