The design of the thermostat is quite simple, regardless of the type of refrigerator. This device is presented in the form of a container that is connected to a thin bellows tube. This tube is filled with freon and communicates with the evaporator.

As soon as the temperature in the evaporator starts to rise, this causes the level of coolant in the tank of the thermostat tube to rise. If the pressure exceeds the set limit, then the liquid drives a lever that closes the electrical contacts. Closing the circuit is a signal to start the compressor operation.

During the compressor operation, the temperature in the freezer and refrigerator compartments decreases, which leads to a similar process in the evaporator. The pressure in it decreases, after which the lever falls into place and opens the electrical circuit, stopping the operation of the compressor.

The more accurately the thermostat works, the more debugged and softer the compressor operating mode will be. Accordingly, the breakdown of the first device leads to the imminent failure of the second.

The breakdown of the thermostat can be determined by a number of characteristic signs:

One or more chambers of the refrigerator stopped working.

If the refrigerator is equipped with several sensors, then that one will stop working the chamber in which the thermostat has failed. In the event that one single sensor functions for two cameras, then both cameras will stop working at once. If there are corresponding LED indicators, it will be possible to determine this breakdown by signals about excess temperature. Some devices may even display the error code of the faulty device on the control display screen.

The compressor rarely turns off or does not turn off at all.

This symptom can be determined by the intensity of the compressor operation, increased energy consumption, as well as the freezing of the freezer, which will all float ice. It is worth noting that drip refrigerators, where condensate flows down the wall, signal the failure of the relay by freezing this condensate, which should not be.

The compressor very rarely turns on.

If the compressor is silent, then its rare turning on can be traced by the increased temperature in all compartments of the device. This fault can also be identified by an overtemperature alarm. 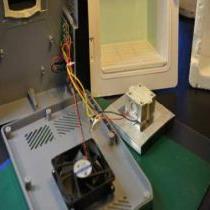 Only a qualified technician can finally establish a thermostat malfunction using diagnostic equipment and visual inspection.

Replacing this device is a complex technical task that is almost impossible to accomplish without skills and special tools. Therefore, only specialists can deal with diagnostics and repairs. After all, knowing nothing about the electrical circuit of the refrigerator and not having a device for pumping out freon, blocking tanks and other devices, it will not be possible to make repairs on your own.

It is important to note that an independent repair can result in such severe damage to the refrigerator, the restoration of which will cost much more an amount than a failed relay replaced by a qualified technician. If you need help with urgent refrigerator repair, call us right now!