The heat pump may not start for several reasons:

The pump starter does not work

The starter is closed, the pump “hums” but does not start

The starter is closed, but the pump does not rotate 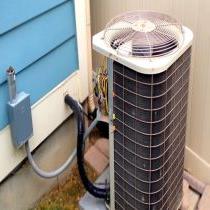 The wiring diagram of most pumps is quite simple. On small pumps with a single-phase drive motor, sometimes even starters are absent:

the motor is started using a conventional starting capacitor. For large pumps, three-phase motors are used and the use of a starter becomes necessary. On the schematic diagram, the start-stop button, the fuse and, finally, the coil of the ice water pump starter. If the starter does not work, then the defect is detected easily and quickly. It remains only to determine why this or that safety device has worked, eliminate the malfunction and try to make sure that the defect does not recur.

The starter is closed, the pump hums but does not start.

The three-phase motor starter has tripped. The engine starts to hum but does not turn. There may be several reasons: either the pump is jammed, or the problem is in the engine itself, or the voltage on one of the phases in the mains has disappeared. In the latter case, the fuse (thermal protection relay) cuts off the voltage very quickly, otherwise the motor has a high probability of breaking.

In order to detect a phase failure or the so-called phase imbalance, press the "Stop" button and check the voltage for each phase at the input terminals. Never check the voltage on each phase with respect to the neutral wire. Check the voltage between phases L1-L2, L1-L3 and L2-L3. All voltages must be of the same magnitude. If not, the cause of the problem lies in the power supply.

If the voltages of all three phases are normal, check for their presence at the input to the fuse box. If there is no voltage on any phase, then either the wire is broken, or the connection is poorly made. Likewise, check the output voltage from the fuse box. The problem here could be either a blown fuse or a faulty disconnect switch (poor connection).

If voltage appears on the terminals, the malfunction is caused either by a break in the connecting wires between the motor and the terminal box, or by the motor itself, or by the fact that the pump does not allow the motor to rotate.

If the driving the pump motor is a single-phase motor with a starting winding, and this motor hums, but does not rotate, then either the starting capacitor is faulty or the pump is jammed.

In cases where the drive motor allows the speed to be varied and the governor is set to the minimum speed position, check that the motor has enough power: the motor torque must always be greater than the pump resistance torque.

The starter is closed, but the pump does not rotate

First check the motor supply voltage. Make sure that the fuses or breaker are closed, then check the voltage at the terminals. If there is no voltage, check the power circuit in the same way as we described above.

If there is voltage at the terminals, measure the current in each phase with a current clamp. Measurement of the current consumed by the motor is the most reliable way to control the operation of the pump if it is rotating.

Indeed, the pump impeller may well remain stationary (the pressure gauges installed at the outlet of the pump will not change their readings after the engine is started), while, how the motor will draw current from the mains (for example, because the impeller rotates on the axis). Note that in this case the current drawn by the motor will be very low and the pump will make a characteristic sound.

Depending on the design of the pump (see section 90), a wide variety of mechanical faults can impede free (easy) rotation of the shaft.

Dirty water with aggressive impurities or limescale causes the pump to "flood "Scale, dirt or other impurities clog the space between the rotor and stator with the motor rotor and the pump rotor" jams ". In addition, this dirt can lead to seizure of the bearings or packing seals. The impeller can be seized by foreign matter.

Therefore, the first step is to make sure that the motor shaft can be turned freely by hand without any effort.

Seizure occurs mainly after the pump has been stationary for a long time. Most often, jamming can be eliminated using one of the methods described above. Otherwise, you will have to close the shut-off valves (if only they were tight), and then disassemble the pump unit in order to get to the impeller and turn it along with the axis.

Further, after starting the pump, you will need to make sure that the force current consumed by the motor does not exceed the value indicated on the motor nameplate. If you need help with heat pump repair San Jose, call us right now!