Opening or closing the microwave oven door blows the mains fuse. Moreover, after replacing the fuse, the microwave can work normally for a while, and then everything repeats again. This is due, in the overwhelming majority of cases, to the door interlocking system, which protects the user from microwave radiation when the oven is operated with the door open.

The interlocking system consists of microswitches and a mechanical part, the main element of which is the crossbar. When the door is closed, the bolt with its latches acts on the buttons of the switches, which leads to their actuation and starting the system. There are usually three microswitches in the oven - the primary PRIMARY SWITCH, the protective MONITOR SWITCH, the secondary SECONDARY SWITCH, but there can also be a fourth - the DOOR SWITCH. The primary and secondary have two contacts - normally open, the door also has two contacts, but normally closed, the protective contacts have three.

Although different models of microwave ovens may have their own circuitry solutions, in general, the principle of operation is approximately similar - if the blocking system is working correctly, when the oven door is closed, the microswitches are closed and the mains voltage is supplied to the primary winding of the high-voltage power transformer of the magnetron. In this case, the current will flow through the mains filter, thermal fuse, closed contacts of microswitches, the primary winding of the transformer, contacts of the magnetron relay - KM, contacts of the main relay, thermal fuse of the magnetron, mains filter, network.

This is how the microwave heating is turned on during normal operation of all circuit elements. In this case, the microswitches do not work simultaneously, but in strict sequence. The safety switch should be activated first when the door is closed. It should also be the last to fire when the door is opened. If the sequence of operation is violated and the safety switch trips before the contacts of the primary and secondary switches open, then a short circuit occurs in the circuit, which leads to the failure of the fuse. Thus, protection against dangerous microwave radiation is realized when the microwave oven is operating with the door open.

Mismatch in the operation of the microswitches can be associated both with the switches themselves and with the mechanical part.

Also, the problem may be purely mechanical. For example, a plastic stop is broken, into which the microswitch is inserted and, accordingly, it will not sit tightly in its seat, which leads to incorrect operation of the blocking device. Or the lever itself may break, which acts on the switch button when the door is closed. 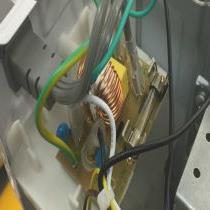 If you do not have sufficient knowledge and skills in electrical engineering, as well as the necessary diagnostic devices, such as a multimeter, it is recommended to contact a service center. It is better to entrust such work to experienced specialists.

Let's summarize. There is nothing difficult in the replacement process. Replacement can be done independently by choosing an identical type. The type can be identified by the special markings written on the part.

It is quite easy to identify and replace a burnt element due to the fact that they are often produced transparent. Burnout on the painted fuses also makes it clear that it is not suitable for use. Before the process, be sure to disconnect the device from the mains to avoid electric shock, and close the case before use.

To prevent damage, follow all the requirements for correct and safe use specified in the instructions for the product. Make sure that all necessary conditions are met for work. Follow all safety rules. If you need help with microwave repair San Jose, call us right now!