Microwave is too loud

The microwave oven usually makes a little noise during operation. Why did she start making strange sounds - a strong hum, buzz, creak, squeak or whistle, knock, you can answer by finding out the reasons for the breakdown. Let's consider some of them:

Over time, the turntable motor will wear out. It either stops immediately or starts making unusual sounds.

The wheels of the stand sometimes make noise when the platform rotates. Especially if they slip on the dirty surface of the camera.

The fan motor may also fail in the same way (in some models, the motor of the turntable and the hood is common).

The air mixer in the oven ensures an even distribution of heat. Its motor is also subject to wear.

The main part is a magnetron, which generates microwave energy, which heats the food from the inside. In good condition, it works quietly. A defective one, as a rule, makes especially unpleasant noises.

Significant noise can cause a capacitor to malfunction. If you make a replacement yourself, be sure to discharge it before use.

The fuse may also be the reason for the lack of heating. This happens as a result of a short on a magnetron, transformer or capacitor.

Loud hum of a transformer is an indication of an overload in its winding due to a short. This will be accompanied by the smell of smoke. 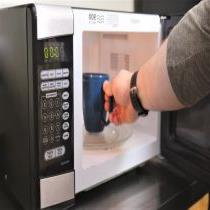 The complexity of the repair is associated with the correct diagnosis of the appearance of noise in your microwave oven. It is better to entrust this to a professional. If you are firmly convinced that you know what the problem is, then you will find the answer how to fix this or that half of a mock in detail on our website. If you need help with emergency microwave repair, call us right now!