There are problems in the microwave oven tray device, which is responsible for uniform cooking and heating of food. Moreover, the oven itself continues to work, but the plate stops rotating. There may be several reasons, as well as methods of repair.

There are only a few malfunctions in which the microwave plate does not spin. Moreover, they can easily be corrected with their own hands, since the rotation device has a simple structure. The reasons for the breakdown can be the following:

the plate is incorrectly installed

the malfunction of the gears of the pallet drive gearbox

the light bulb burns out 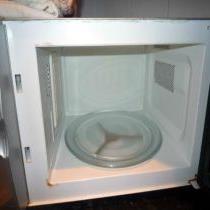 It is worth noting that the most common reasons why the pallet does not spin is its incorrect position or an engine failure that has occurred. The winding in the motor can burn out due to sudden power surges, or drops of detergent and water get into the motor.

Malfunction of this part of the microwave oven is much less common. More gears suffer here, which over time are eaten up and begin to wedge and slip. This phenomenon is especially common in modern models. Since earlier versions used metal gears, modern manufacturers often install plastic ones. This affected the price, but in the end the quality became much worse.

In the event of a malfunction of the motor or gearbox, you will have to change the part completely, as it is no longer suitable for continued operation or for any repairs.

In this case, you will have to look for a solution to the problem in the microwave control unit. It is rather difficult to replace this part on your own, since knowledge in the field of electronics is needed so as not to increase the number of breakdowns. In this case, it is recommended to take the stove to a repair service.

This is another story. In some microwave ovens (especially in older models), it is not uncommon to find this phenomenon: there is a serial circuit in which a light bulb is turned on. If it burns out, then the motor, accordingly, stops working. Such a design is very unwise. But the solution to the problem is the simplest - replacing the light bulb.

Engine breakdown is a common reason why the microwave works, but the plate does not spin. In this case, it does not matter what the problem is: in the gearbox or in the winding, you will have to change the motor in any case. If you need help with home microwave repair, call us right now!