Let's try to find out why the microwave turns off a few seconds after starting.

Most often, problems arise not because of the microwave itself. This happens if the owner has set the highest power, the timer is set for a relatively long period of time, and there is not enough ventilation space in the oven. As a result, the cooler could no longer cope with such a load, the fuse went off and turned off the device on its own.

First of all, it is recommended to turn off the appliance for half an hour and then try to reheat the food again. This can help if the reason for the strange behavior is hidden in the operation of the thermal relay: you can diagnose the source of the spontaneous shutdown by simply touching the case with your hand.

Frequent reasons for switching off the microwave oven after starting:

The device heats up something from the outside. For example, during the hot season, the kitchen space can be heated to the extreme temperature. If the appliance is in the immediate vicinity of the stove, the effect will be the same.

Faulty fan motor, which will have to be replaced. This happens if, when you turn on the microwave oven, it smells of fused plastic and sparks are visible inside.

Violation of the relationship between the starter and the rotor due to slight misalignment. Here it is worth taking a closer look: in the space between them there may be pieces of food, accumulated dust.

Failure of the fan bearing, which requires its replacement.

Failure of the fan blades. They can either scroll or break off altogether. You can try to restore them, but the best option will always be a replacement.

When you turn on the oven fan starts to hum - cleaning is necessary.

The microwave turns on, but the fan does not. In this case, the cause of the malfunction is in the damaged socket or power cord.

The cooler blades do not rotate, which means that the button block or the speed controller is malfunctioning. 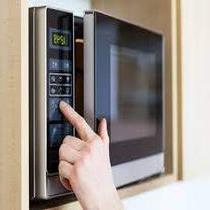 You should fix problems in the operation of the microwave oven yourself only with the confidence that the reason for the inoperability is obvious. Initially, you need to read the instructions for the device, since any model of microwave oven has individual design features of work and internal structure.

It is necessary to pay attention to how long the oven turned off after the start was made. Some of the problems can be diagnosed in this way. If the device turns off after 2-3 seconds, presumably, it may be the following malfunctions:

blown fuse. There are times when only he breaks down. Everything is simple here: replacement guarantees further proper operation of the microwave and malfunction of the magnetron. In this situation, both the magnetron and the fuse are changed - the breakdown of the inverter, more precisely, a short circuit has occurred on its board. It is necessary to replace the inverter and the fuse

the main control module is broken - only replace it.

If, according to estimates, 6 seconds pass before the microwave turns off, the reasons may be the same as when it was turned off after 3 seconds, except for a blown fuse. However, if a whole 22 seconds pass, you need to check the cooling system and the magnetron:

check the integrity - whether the magnetron coil has broken. If yes, the furnace is waiting for the complete replacement of the magnetron

inspect the fan and, if necessary, change parts such as the inverter and the control module

For example, there is no need to fix the breakdown of the fan motor: it needs to be replaced, and it will cost almost the same as a new fan.

If the problem in the example described above is about the broken positions of the starter and rotor relative to each other, then the repair process includes only disassembly and assembly of the fan. Any contamination found must be removed before assembly. If you need help with microwave repair around me, call us right now!