Any breakdown leads to the fact that the door ceases to hold, fix or close normally. The reasons for such malfunctions are different, but first, it is worth listing all the visible signs of the need for repair:

The door is obliquely adjacent to the plate itself. A fairly rare case, but sometimes it happens that the door and even the stove itself can be twisted if it stands on an uneven surface. The curved one will have to be replaced, but the legs of the plate can be adjusted in height.

Dangles or walks too freely. This is due to the wear on the hinges that hold the door. The hinged screws can be tightened with a regular screwdriver. Sometimes you have to disassemble to replace the loops with new ones. The hinge device has springs that need to be tightened or replaced.

Closes normally but does not lock. The feature applies only to those plates on which a locking lock is installed. If it is worn out or broken, you will have to install a new locking device.

It closes poorly, while dirt is visible on its borders and the plate body. A banal reason, however, housewives rarely pay attention to the cleanliness of the area adjacent to the oven. The stove just needs to be well cleaned and washed.

The rubber seal is deformed or rough in some places. Rubber also wears out, and any roughness of the seal will lead to the fact that the door will not adhere tightly to the body. Such a seal will have to be replaced. The oven will close like new.

The door has to be closed with force. This may also be due to the seal, which often jumps out of the special groove. You need to put the rubber gasket back into the gutter and make sure that it is firmly fixed in place.

You cannot close the door tightly, as something is interfering with it. If all the parts of the oven and doors are in order, then it is worth inspecting the seal. It is possible that some solid object has accidentally fallen into it, which prevents a normal fit.

Does not open. This sometimes happens on expensive multifunctional stoves. For example, the oven locks up if you activate the childproof lock or put it on self-cleaning. Usually the door can be unlocked, but sometimes you have to perform a complex sequence of actions prescribed in the instructions for the stove. 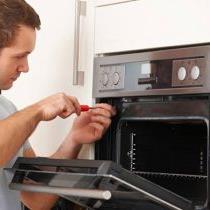 If all else fails, then the stove can be disconnected from the power supply - so its blocking will disappear immediately. Sometimes the reason for blocking is a breakdown of the lock itself or the electronic control unit. Here the help of the wizard is needed.

Many malfunctions arise for insignificant reasons, you can fix them yourself. In extreme cases, you have to disassemble the door and change defective parts. If there is not enough experience or knowledge, it is better to entrust the repair to the master. If you need help with emergency stove repair, call us right now!