Range hood doesn't vent any cooker emissions to the outside

The purpose of the hood is to remove (draw) from the kitchen space the air saturated with odors and vapors naturally occurring during cooking.

It is not difficult to detect the problem of insufficient draft of the kitchen hood. In this case, the odors become more intrusive, and condensation forms on windows, furniture and walls.

Unfortunately, such a problem as the insufficient performance of the hood is provoked by its owners themselves. It is necessary to clean the grease trap and filters of the cooker hood on time and periodically. This way you will avoid most problems with this household appliance. 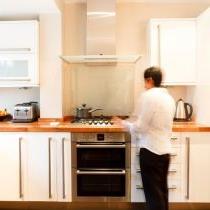 The algorithm of actions in the case when it is necessary to clean the hood filter (as well as in the case of other maintenance work) is always described in the operating instructions.

Hood filters contamination hard to give. But, following the instructions, you are unlikely to be mistaken and you can probably easily clean the hood filters.

If the filter is disposable, it is not cleaned, but simply replaced with a new one.

Most likely, if your hood began to remove odors poorly, it did not break, but simply clogged. Clean all filters and try to start the appliance again.

If the hood is clean but draws out odors and moisture poorly, it is most likely that the fan is defective (one or more blades are broken) or the air duct is clogged.

If the fan has broken down, replace it with a similar new one corresponding to the model and brand of your hood.

It is possible that the problem of high humidity in the kitchen and insufficient draft of the hood is not at all provoked by a malfunction of the kitchen equipment, but by the lack of draft in the chimney.

If there is no air circulation in the chimney, even the most powerful fan of a kitchen hood will not be able to extract vapors and odors from the room.

In a private house, the exhaust duct can be cleaned independently, in a high-rise building it must be done by the public utility.

A master can help even when it is not possible to clean the ventilation duct. An alternative option in this case is to lead the exhaust outlet pipe out through a hole in the wall or window frame.

The exact cost of repairing a kitchen hood that weakly removes odors in each case is determined by the results of a breakdown diagnosis, and also depends on the brand and model of the kitchen hood. If you need help with range hood repair near me, call us right now!