Is your technique starting to malfunction? The refrigerator compartment does not cool well, and the temperature control does not give a positive result? It is possible that a freon leak has occurred. Unfortunately, without diagnostics and professional examination, it is almost impossible to establish the true cause, so you should not jump to conclusions. Perhaps the thermostat is out of order or the room temperature is too high. In other situations, one may suspect that the refrigerator began to cope poorly with its functions precisely because of the gas leak from the cooling system. To be convinced of your guesses, you need to pay attention to some points and indirect signs. If at least one of them is available, then you need to call a specialist. Whatever it was, to cope with such a difficult task as finding a leak and then refueling the unit can only be done by an experienced craftsman who has the appropriate equipment and toolkit at his disposal.

Poor cooling. Gas leaves the cooling system gradually, so the temperature problem can snowball. In this case, a rise in temperature will be noticed in one of the chambers, or in both at once.

Compressor cycle is too long. When there is a leak of freon in the refrigerator, the compressor, in order to compensate for the lack of cooling, starts to work for a longer time with short time intervals for a break. Working in such an emergency mode, its mechanism and components are under heavy loads, which can subsequently lead to breakdown.

The compressor does not start, there is no cooling at all. This is typical for the last stage, when the refrigerant has already completely evaporated. The engine stops starting, and the chambers are at room temperature. The device begins to thaw.

Special signals. A large number of more modern models and models with an information display, when the temperature inside the chambers rises, they begin to signal a malfunction. Certain indicators light up red, flash or beep. Also, a certain error code appears on the display, which indicates a leak.

Visual inspection. The first thing you can do yourself if you suspect a leak is to inspect the cameras. If you find that a large layer of snow has formed on the evaporator in a short period of time, the crying evaporator has swollen, you noticed traces of rust around the perimeter of the compartment, most likely the leak is in the evaporator housing or the heating circuit. 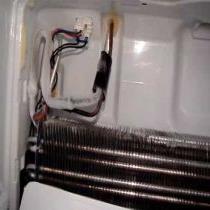 If you do not know how to find a freon leak and what to do with a problem of this kind, then there can be no question of any independent repair. There is no need to risk your equipment - it is better to entrust this difficult and responsible work to competent craftsmen who will carry out the necessary work, following the established safety standards. If you need help with refrigerator repair, call us right now!