The reasons for the appearance of an uncontrolled spark lie elsewhere. Often the place of formation of such a defect is:

Reason 1 - moisture inside the control button

Most likely, during the washing process, some water got on the ignition control button, as a result, part of the moisture penetrated inside.

Considering that a high discharge voltage is supplied through the ignition button circuit, it is quite small amount of moisture so that an uncontrolled spark appears on the gas stove spark gap.

Usually, the defect of an uncontrolled spark of a lighter in such cases disappears after a while. Moisture inside the button dries up, the short-circuit factor disappears, respectively, spontaneous clicks stop.

Often, lighting all the burners of the gas stove for about 15-30 minutes helps to correct the short-circuit defect due to "water that got after washing".

Reason 2 - the formation of a junction

The junction formed inside the ignition button can have different shapes. The formation of a seam can be facilitated by the same moisture that got inside the button after washing. Typically, this "water" seam is formed due to the periodic infiltration of water.

Time after time, deposits accumulate, and ultimately an oxide seam is formed. In addition, grease, soot, and dust can accumulate inside the button body.

In this scenario, you will have to disassemble the gas stove:

Or, in the case of more modern designs of gas stoves, it is necessary to get to the structures of disk control devices that simultaneously act as a button and a gas supply regulator burners.

After removing the part from the gas stove body, the deposits are cleaned, after which everything is assembled in the reverse order. However, this work is the prerogative of the

The mechanical connection of the contact group of the ignition button of the gas stove should also be attributed to the category of reasons associated with a short circuit. Such a defect, as a rule, can occur on slabs that have been in operation for a long time. True, the same malfunction is not excluded on new devices, where the quality of the components leaves much to be desired.

Mechanical connection is formed by any of the button contacts, which simply breaks off, for example, due to physical wear and tear. The broken off part is displaced from the attachment point and forms an electrical connection with another contact. In fact, the effect of the ignition button on is created - that is, the spontaneous operation of the electric ignition on the burners of the gas stove.

With such a malfunction, the only way out is the complete replacement of the component. 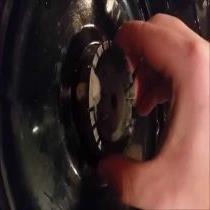 It is better to entrust the presented repair options to a specialist. This is the case when an independent solution to the problem is not recommended. If you need help with high-quality stove repair, call us right now!