The washing machine has long made housework easier and works without the participation of the owners. You only need to load a "portion" of dirty laundry, and then pull out the clean one. But sometimes the machine leaves puffs and even holes on things after washing, which greatly upsets the owners.

When the washing machine has nothing to do with it

Here is a list of typical reasons when the washing machine spoils things through no fault of its own:

Sharp elements of the washed laundry. Clothes often have metal parts - hooks, buckles, buttons, zippers, jewelry. They cling to other clothing as the drum rotates and leave puffs or holes. What to do, how to wash such things without harming others? Close zippers before washing, fasten hooks and buttons. Turn things inside out with metal or sharp elements and accessories.

If you can't turn things out, or you doubt that this will protect the neighboring ones from damage, then take a mesh bag. Hide the “scratching” clothes in it and put it in the machine. For crocheted underwear - bras and corsets, use special containers for washing.

Wrong washing mode. It is no coincidence that the machine has many programs. Fabrics are unequally tolerant of high temperatures and high spin speeds. For example, some models of washing machines have a spinning cycle of 1600 rpm. It is perfect for heavy linen or heavy canvas fabrics. But silk clothes can easily get holes after such spinning.

Choose the right program for washing different things: for cotton, for wool, for delicate fabrics. The manufacturer's recommendations are indicated on the clothing tags. If there is no special program, for example for silk, use the "delicate cycle" or "hand wash". Look again at the instructions for the washing machine. There are also recommendations for washing different types of fabrics.

Overloading the machine with laundry. Another rule that housewives forget to follow is loading by weight. The principle "I cram more - I will quickly get rid of a heap of dirty linen" can lead to sad consequences. There is little free space in the drum, things press against each other and chew between the hatch and the drum. Moreover, when spinning at high speeds, such "extra" laundry can slip under the cuff into the gap of the drum and tub, and then serious damage to the clothes cannot be avoided. 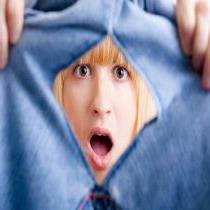 Foreign object in the drum. Most often, this is a metal bone from a bra, which at one end falls into the tank, and at the other end it gets stuck in the perforation of the drum and clings to things during washing. Sometimes ladies' hairpins, nails, self-tapping screws stick out of the holes, which fell out of the pockets, but did not have time to fall deep into the machine. You need to feel the surface of the drum with your hand or with an easily clinging cloth, for example, nylon. Take a sock or sock, stretch it over your hand and stroke the drum. If there is a protruding object, you will catch on to it. If you find the tip of a foreign object in the perforation hole, you can remove it with tweezers or a wire loop. If the object has already fallen deep into the machine, then you will have to disassemble the SMA and look for it inside. If you are very far from the technique, call the master.

Drum damage. Washing things with metal accessories, such as heavy buckles, large buttons, rivets, can ruin not only other things, as we wrote about above, but also damage the drum itself. From impacts and friction on a smooth surface, scuffs and burrs can appear, which will cling to clothes during washing and leave puffs or holes on them.

Foreign objects from pockets or loose items of clothing, such as bones from a bra, can also damage the drum. They get stuck in perforations, cling to the walls and turn a smooth hole into a hole with uneven edges.

Finding a drum damage is easiest with a nylon. It adheres well to all surface irregularities. Put an old stocking or sock on your hand and move your hand over the surface of the drum.

The drum needs repair. Small irregularities are eliminated by grinding.

In case of severe scoring or significant damage to the perforation, a complete replacement of the tank is required (drums are not sold separately from the tank).

Bearing wear. Over time, due to long-term operation of the machine, the oil seal loses its tightness, water enters the bearing, and it begins to collapse. Therefore, there is a gap and a gap between the edges of the tank and drum. Laundry gets there, which chews and tears during rotation. Due to a damaged oil seal, the laundry can also get dirty, because dark bearing grease gets into the tank. It is necessary to replace the bearing and the oil seal (sold assembled and changed at the same time).

Damage to the drum locking mechanism (in vertical-loading machines). The hatch on such machines consists of two halves, which are fixed when closed with a special mechanical device. It has a plastic body. If handled carelessly, the body can be damaged: chips are formed, the spring of the locking device protrudes outward. When washing and spinning, the laundry clings to the sharp edges of damaged plastic and a metal spring, so clues and holes appear on it. It is required to replace the drum flaps. Sometimes you have to change the tank completely. If you need help with emergency washing machine repair, call us right now!