If your machine suddenly leaks:

When, at the time of washing, you can see marks on the floor near or under the machine

water marks on the body of the unit from the hatch

water that flows out of the machine's dispenser

Unplug the washing machine from the mains. At the same time, you must not step into a puddle of water - when, during a leak, water is on a wire in the machine, you can get an electric shock! If possible, unplug the power cord. When this is not possible, turn off the electricity on the panel and after the equipment is de-energized, you can pull out the plug. Then you can turn on the electricity again.

Perform a water cut. For this, a valve is used that supplies water to the washing machine or the entire water supply to the dwelling. Everything depends on individual characteristics.

Get rid of the laundry. When the machine does not have time to reach, remove the water using the drain filter and take out the clothes. 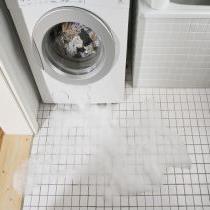 Malfunctions in which a leak occurs when water is drawn:

When a leak was noticeable at the time of water intake with a washing machine and water became noticeable on the floor, look at the inlet hose. Perhaps he moved away in the places of fixation. It remains only to fix the fastening nuts more strongly

Sometimes the inlet hose breaks and a leak appears - for example, due to an incorrect installation, it can fray. Then it is necessary to replace this hose with a new one. When it became noticeable that water is coming out of the detergent dispenser, most likely a blockage has formed in the dispenser hopper. Conditioner and powder, regardless of quality, stick to the walls and strongly close the drain channel. To get rid of the problem, pull out the dispenser and wash it thoroughly in warm water. To prevent this in the future, it is necessary to clean the dispenser at least once or twice a month.

When water flows when typing under the typewriter, it is obvious that the branch pipe has broken or the fastener has lost its strength between the inlet valve to the dispenser, or from the dispenser to tank. To more accurately tell about the place of damage, it is necessary to disassemble the machine and inspect it completely. It is recommended to entrust such actions to a professional in repairing washing machines.

Malfunctions in which the washing machine flows during washing:

When the washing machine flows from the dispenser and foam becomes noticeable - most likely, there is no breakage, and too much powder was poured. To prevent this, it is necessary to use measuring cups and carefully follow the instructions for the detergent. When washing bulky and porous things - jackets, overalls and tulle, you need to take less powder than usual. This is due to the fact that the material strongly churns up the foam and as a result the machine may leak

Malfunctions in which the washing machine leaks while rinsing:

When water is visible on the floor, in the area of ??the outside, the drain filter is most likely not fixed correctly. Then it is necessary to be careful not to damage the thread, to tighten it. When water marks are visible on the floor, under the washing machine, this indicates that the drain pipe is faulty. In this case, it is necessary to disassemble the machine and eliminate the malfunction. If you need help with immediately washing machine repair, call us right now!