It should be borne in mind that the volume of many sounds emitted by the washing machine is not standardized:

sound when pumping water and pouring it into the drum

sound when the drain pump is running

signals about the end of the program

Errors during installation provoke strange loud sounds during operation much more often than inexperienced people think; quite often the car makes noise due to the fact that it is not level. The building level will help to check this as accurately as possible. Also, the sound volume will be excessively high when the unit touches a wall or other hard surface. No wonder: solids are excellent resonators and amplifiers of acoustic vibrations.

Shipping bolts are not removed

Sometimes they simply forget to unscrew the shipping bolts, or think it is not important enough - and then they are surprised at an incomprehensible noise. In this case, it is necessary to urgently turn off the machine and remove unnecessary fasteners. If this is not done, the main parts of the device may be permanently damaged. The drum is particularly affected. But it may not be just the bolts.

Complaints that the machine is noisy are often associated with the ingress of foreign objects. It doesn't matter if they are spinning with the laundry or stopping the drum - you must act immediately. Often, foreign things end up inside because the pockets of clothes have not been checked. Service center technicians extract all sorts of things - seeds and rings, coins and bracelets, screws and bank cards. It is even difficult to say that it has never been in the drum during washing.

When the bearings are damaged, the machine crunches and clanks. Remarkably, at high revs, the volume of the crunch increases greatly.

The machine often rattles also due to excessive loosening of the pulley (drive belt). As a result, the part holds on the axis worse, begins to make very strong movements that are not provided for by the design. Most often, this situation is recognized by the fact that something clicks inside.

When the machine knocks and cracks loudly during rinsing and spinning, it is most likely that the counterweights are malfunctioning. Usually it is noted that some kind of "metal" blows are heard. 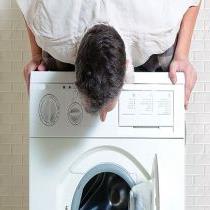 So, the causes of noise in the washing machine are varied. But all users can prevent many of these defects, or at least reduce them. The most important rule here is not to overload the device. It is also worth considering that washing several times in a row without a break for at least 1-2 hours contributes to the wear of the machine. There will be less extraneous sounds if you use washing at a high temperature only when there is a real need for it.

By cleaning the filter and pipelines, they contribute to the removal of foreign inclusions from the drum when draining the water. Wipe the cuff after each wash to prevent delamination and touching the drum. It is also very important to use soft water.

There are a few more recommendations:

wash all things containing metal elements only in closed bags

ventilate the drum after the end of washing

fix everything hoses and cables carefully

comply with all rules of transportation and connection to utilities

comply with all other provisions of the instructions If you need help with immediately washing machine repair, call us right now!