There can be a lot of reasons for the appearance of a bad smell in the washing machine.

The most common reason is the most commonplace. The machine "suffocates" due to the fact that you close the hatch tightly immediately after washing. Remember, the washing machine takes time for the moisture to evaporate. So always leave the door ajar for at least a couple of hours after washing.

Also, do not forget to wipe the rubber cuff after washing: water remains in its folds, and often small debris. This can lead not only to the appearance of an unpleasant odor, but also to the formation of mold - usually black in color. If the mold grows deep into the rubber, the cuff will need to be replaced. Surface mold, however, can be easily removed by rinsing the cuff with dishwashing detergent.

Do not use the drum of the washing machine to store dirty laundry. Imagine: there is high humidity in the machine (especially if you did not dry it properly after washing), and you put dirty clothes in it. It turns out to be an ideal breeding ground for bacteria, mold and other unpleasant animals. Buy a basket for dirty things: it will not take up much space in the apartment, but it will save you from troubles with the smell from the washing machine!

Below are the reasons for the appearance of a musty smell are not as common as errors in operation, but they still have a place to be.

Unsuccessful change of powder or conditioner. Sometimes - the reason for the unpleasant smell lies in the new detergent, especially if it was not of the best quality. "Sticking" on the walls of the washing machine, over time, the product begins to smell not at all of perfumes, but as something rotten.

Excess powder and conditioner The reason for the smell is almost the same as with a low quality detergent. Excess sticks to the walls of the machine and after a while begins to give off an unpleasant odor.

Soiled detergent drawer. Even good products, poured in the right amount, leave a small film on the sides of the tray. Over time, the layer becomes thinner, often traces of mold appear. Avoiding this problem is not difficult: once a month, take out the tray and rinse it under warm water.

The detergent duct is dirty. As with the tray, a moldy layer of detergent may develop further downstream - that is, in the powder and fabric softener channel. Take out the tray and shine a flashlight: if traces of mold are visible, it means that mechanical cleaning is required. You can arm yourself with a small brush and do it yourself, or entrust this procedure to the master. Please note: most often, problems with the detergent supply channel occur when the tray is heavily soiled. So for the prevention of this ailment, just keep the tray itself clean and then you will never face a similar problem.

Drain filter contamination. Normally, the drain filter catches debris so that the sewer does not clog: the largest lint, threads, buttons and even coins can all be in it. The drain filter must be cleaned every six months! Otherwise, all the "wealth" that he has caught can begin to "sour" and rot, exuding a corresponding smell. In addition, a clogged filter can make it difficult or completely “block” the drainage of the washing machine.

Water remains in the machine. A little - so you can't see it, but over time it starts to "go out" - especially if the machine is tightly closed during idle time. Most often, the reason lies in the incorrect connection of the unit to the sewage system, or, if such a problem did not arise before, the drain pump began to malfunction. We recommend that you seek help from a professional.

An old drain hose can cause an odor: on the walls, especially of low-quality products, debris and residues of detergents often adhere, which begin to rot and become a source of stench. You can try to clean the silted hose: for this "run" the machine without laundry at the maximum temperature. If the smell remains, the old hose should be replaced with a new one.Scale "on the heating element can also give off a rotten and rotten smell. It is no coincidence that we write scale in quotation marks - in fact, it is a plaque from detergents, lint, litter and, perhaps, impurities from water. Most strongly all this "cocktail" sticks to the heating element. In some cases, especially if you rarely use the machine or often wash clothes at low temperatures, the "scale" begins to smell. However, it can "smell" even at high temperatures - in this case, a burning smell can be felt. Use a typewriter cleaner or citric acid to get rid of the smell. This will clean the heating element from "scale" (citric acid should be used, running washing without laundry at a temperature of 90 degrees). If the instructions for your unit say that it is allowed to use chlorine-containing bleaches, you can “drive” the machine to 90-95 degrees with chlorine.

If “flushing” does not help, unfortunately, a call to the master and mechanical cleaning is required machines from "scale".

Problems with common building communications. Sometimes, the reason lies not in the typewriter, but in the sewage system: the smell comes from the pipes, and the washer only lets out the stench. However, in this case, it will smell not only from the typewriter, but also from all the sinks in the house. 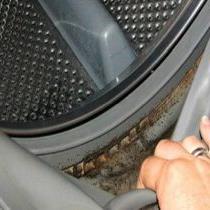 Possible solutions to problems are given in their description above. In conclusion, I would like to appeal to all owners of washing machines: please read and follow the instructions! Correct and careful operation is a guarantee of longevity of any equipment. Ventilate, wipe, clean the machine according to the manufacturer's recommendations and then it will always delight you with excellent work. If you need help with washing machine repair near me, call us right now!