Washing machine shaking too much

Why does the washing machine jump?

Very often, increased vibration is characteristic of machines that have just been installed. There may be several reasons for this:

If the washing machine has just arrived from the store, the transit bolts may not have been removed. They are necessary to fix the tank of the machine during transportation, and although they do not block the drum "tightly", they still seriously interfere with work and lead to increased wear of the main units. So if the machine has just crossed the threshold of your house, be sure to check if all the shipping bolts were removed during installation! The number may vary from manufacturer to manufacturer, so it is best to check the instructions.

If all transport devices are removed, the problem may be in the installation. Washing machines are quite capricious - they like a perfectly flat floor. Try shaking the clipper with your hands. If it “limps”, it means that you need to adjust the legs and fix them in the desired position with a lock nut.

Not often, but still there are situations when the washing machine jumps a lot due to the floor being too smooth and “slippery”. In this case, try to install the unit on a rubberized mat or use anti-slip stickers for the legs (as a last resort, you can take double-sided construction tape).

If your machine has served faithfully for more than one year, and suddenly began to vibrate - perhaps a problem in the imbalance of the linen. When overloading or uneven distribution of things on the drum, your typewriter is heavy, damp laundry “rocks” it. We recommend stopping the spin, “shaking” and spreading the laundry in the tank (if overloaded, divide it into two portions) and restart the spin program.

But if everything is in order with the installation of the machine, and the situation with jumps repeats regardless of the amount of loaded laundry, then, unfortunately, we are talking about some kind of malfunction. 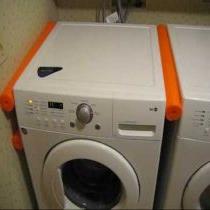 Spring wear. Another vibration catcher is the springs on which the tank is attached. Like shock absorbers, they wear out over time and lose their elasticity. Both springs need to be replaced.

Bearing wear and destruction. Over time, due to moisture ingress, the bearing begins to rust and deteriorate. In the initial stages, the machine makes an iron grinding; in case of more serious damage, this leads to a free lateral movement of the shaft with a drum and strong vibration during spinning. It is highly discouraged to use such a machine! If the bearing "scatters" during operation, its fragments can seriously damage other parts of the unit. If you need help with high end washing machine repair, call us right now!