There are quite a few reasons for this kind of malfunction, many of them can be eliminated independently, since the difficulties in eliminating them will not be more difficult. Let us first consider the simplest problems in which the machine begins to vibrate, shake, jump and emit an uncharacteristic noise. 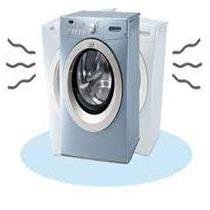 One of the most common reasons why the washing machine begins to shake and jump is when they forget to remove the transport bolts (fasteners) that are located at the back of the unit from the machine they just bought, usually there are no more than 5 of them, depending on the model. They are designed to fix the drum during transportation, so that the tank in the places where the springs are attached does not fly off the seats, and also protect the drum suspension from damage.

Another common problem due to which the washing machine jumps and shifts in the spin time is not the correct setting. The main condition for the normal operation of the machine is its strictly horizontal position on a flat and non-slippery floor. The machine has legs on the bottom that are easily adjustable with a key, adjust them so that it does not stagger and stand stable, you should also level it using a building level (spirit level). It is advisable to lay a rubber mat under the unit, if the floor, for example, is made of tiles.

The reason the washing machine jumps is not an even distribution of the laundry in the drum or, as they say, the imbalance of the laundry. This happens when the laundry is distributed in one place, for example, in a duvet cover. In this case, stop washing, turn off the power to the unit, wait until the door unlocks, then open it, if the door does not open, use the emergency drain, then distribute the items in the drum evenly so that they do not clog in one place again. This reason is rather typical for cars released some time ago. Today, they are equipped with the function of even distribution of the laundry.

Excessive weight of the laundry can also lead to abnormal vibration, so free the excess clothes from the drum and you can start washing again. Basically, with such problems in modern machines, error codes are displayed on the display, for different models they may differ from each other. It is not advisable to load items into the machine that absorb large amounts of water, such as terry, because this will increase the weight of the items being washed. In this case, it is better to reduce the amount of loaded laundry. If you need help with urgent washing machine repair, call us right now!