Reasons for leakage during washing and spinning:

Since the technological operations during washing and spinning are fundamentally no different from each other (draining during spinning occurs according to the same scheme as during washing), it makes sense to consider the reasons for the appearance of water in machines together.

One of the most common causes of leaks during the operation of a washing machine is a malfunction of the drain pump or filter. The first element is necessary for directly pumping out water from the working volume during any operation, and even the smallest solid object inside the washing machine can disable it.

Due to its small size, it can not only fly through the drain pipe, reaching filter, but also to knock it out because of its enormous speed (the average rotation speed of the drum of the washing machine is 1,000 rpm, because the conventional coin has a very decent starting speed), which will damage the pump. Obviously, for the same reason, the filter can quickly become unusable.

If water is predominantly collected at the rear wall of the device, the reason is probably a malfunction of one of the two oil seals. The stuffing box is another sealing device that is designed to prevent the formation of drips from the drum bearings, which, in turn, ensure the quiet operation of the machine. Therefore, if a leak is accompanied by a multiple increase in noise compared to that usually emanating from a machine, this is a sure sign that the problem lies either in it or in the bearing.

Here is a list of the most common damages:

If the washing machine leaks while filling the water, the pipe leading from the detergent container to the filling valve may be damaged

When the leakage comes from the bottom when draining water, check the drain pipe connecting the drum to the drain pump br> Often water flows from under the door - this is a signal that it's time to change the rubber seal that fixes the hatch during washing.

Rarely, but still it happens that the machine flows after the end of the cycle. Moreover, you do not see exactly where it is dripping. And after a short time, you find a puddle on the floor. In this case, it is necessary to inspect the tank for cracks. Sometimes there is damage to the integrity of the case, which can cause the machine to leak.

If the washing machine leaks during the spin cycle, and, in addition, during the cycle you hear a characteristic metallic grinding - as if rusty chains clank - most likely the problem is in the bearings. 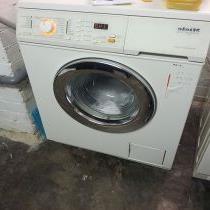 Before thinking about repairs, there are a number of steps to take to eliminate the hazard.

First, turn off the power to the washing machine. This means not just pressing the power off button, but unplugging the cord from the outlet. If it is not possible to do this safely (for example, there is a risk of touching water), then you will have to turn off the electricity on the switchboard.

Next, you need to see if there is water in the washing machine. If the wash is stopped halfway, then you need to drain the water through the drain filter and only then take out the laundry. The filter is located in the lower part of the machine on the right (closed with a lid).

When all the dangers are leveled, you can begin to identify the reasons why the washing machine is leaking.

Eliminate the leak yourself. It is possible to replace damaged parts: pipe or hose. If the matter is in the bearings, it is better to call the master. If you need help with washing machine repair, call us right now!